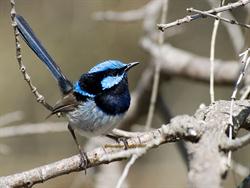 Karaoke is stressful enough as it is. The public singing and the stage lights on you and all. But imagine your life being on the line: Karaoke…or Death?

If you’re a baby bird in the Australian Superb Fairy-Wren’s nest, that’s just the predicament you’d be in. It’s a sing or die scenario.

Yes, there really is a kind of bird called a “superb fairy-wren” and it was likely named by a privileged and precocious 7 year old English girl who’s been reading too much Harry Potter.

But the name aside, these small wrens teach their unhatched young a song. Not just any song. It’s a song that’s unique to a particular mother and that only this nest of hatchlings will learn. The mother wren lays her eggs. The mother perches near the nest. She sings the same tune every four minutes, over and over for a week. Her unhatched babies learn the distinctive melody and commit it to memory.

Mother wrens have poor eyesight. When momma wren is out looking for food, a sneaky cuckoo bird mother will fly over and drop one of her eggs into the wren’s nest. But that’s not the worst of it. Cuckoo eggs hatch sooner than wren eggs. And when it does hatch, it hatches a devious plan. The fluffy, little evil cuckoo baby bird will push the unhatched wren eggs out of the nest and send them plummeting to their death… thus securing all food supplies for himself.

Unless…. the momma wren challenges the baby cuckoo to perform the musical password. Baby wrens learn the melody before the cuckoo impostor gets dropped in the family. So, the cuckoo baby doesn’t know the score. It’s a Karaoke death match… and in this sing or die scenario, when the murderous little cuckoo hatchling hits a sour note, dinner is cancelled.

Talk about a tough crowd.